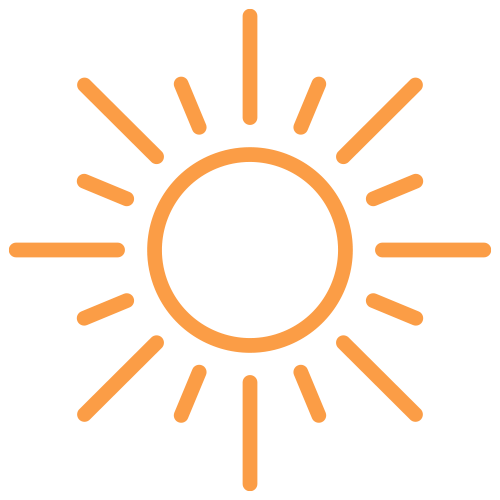 Neighborhood Allies: Beyond the Laptops

Neighborhood Allies is a Pittsburgh-based, community development partner that embraces its multifaceted role as a “funder, lender, connector and consultant” for Pittsburgh communities seeking strategic leadership to renew their neighborhoods and invite meaningful participation from the residents they serve.

Well before the COVID-19 pandemic, Neighborhood Allies was working to address disparities in computer and internet access for Pittsburgh families, recognizing that nearly one in five Allegheny County households lacked home internet access and 13% didn’t own a computer at all. The start of the COVID-19 pandemic prompted a greater sense of urgency within the organization, particularly given the reported shortage of 7,500 computers for Pittsburgh students transitioning to remote learning.

In partnership with Computer Reach, Neighborhood Allies collected 1,000 donated laptops with the aim of distributing them to Pittsburgh families and communities affected by the COVID-19 lockdown. Despite taking this promising first step to mitigate the effects of the immediate crisis, access to power adapters was greatly delayed due to shipping complications during the pandemic, making it logistically challenging to provide laptop packages to Pittsburghers impacted by the pandemic.

With awareness of the ever-growing need for families and individuals to gain free access to laptops for distance learning, remote work, telemedicine, and more, Neighborhood Allies soon recognized that a concrete solution (access to power adapters) as well as a more robust marketing campaign would be necessary to expand operations, increase equipment & funding donations, and establish the initiative as a broadscale campaign situated to help the Pittsburghers most in need.

TrailBlaze Creative, capitalizing on its existing connections, first offered assistance by connecting Neighborhood Allies with the Pittsburgh Technology Council. The Council, aided in part by the University of Pittsburgh’s procurement channels, helped Neighborhood Allies secure a sufficient number of power adapters to ensure that the organization’s initial 1,000 laptops would be immediately distributable and usable for families and students relying on distance learning.

In working to attract influential partners to contribute to the initiative, TrailBlaze and team collaboratively secured a $25,000 match grant from the autonomous vehicle company, Aurora. As a result of this partnership, Aurora connected Neighborhood Allies with other organizations interested in contributing match grants and other resources to the Beyond the Laptops campaign. The partnership with Aurora led to a decision to develop a broadscale public campaign, culminating in the creation of a $200,000 challenge grant.

With a limited timeline of just 2.5 days, TrailBlaze Creative set to work developing a scalable, sustainable but immediately impactful campaign strategy to ensure maximum fundraising, increased equipment donation, and expanded community interest and support for the “Beyond the Laptops” initiative. In conversation with Neighborhood Allies, the TrailBlaze team determined that the campaign should employ an integrated approach, emphasizing community connections to form an organic network of influential and high-visibility contributors who, by virtue of their participation, would attract greater public, business, and foundational support. With this unifying principle in mind, TrailBlaze chose “Bridging the Divide” and “Building Pittsburgh’s Newest Bridge” for Neighborhood Allies’ campaign taglines, aligning all campaign images to synchronize with these slogans.

Due to restrictions to in-person marketing efforts as a result of COVID-19, TrailBlaze adopted a purely digital approach that capitalized on social media, emails, promotional webinars, and digital fliers. The campaign’s key, time-sensitive component was the Beyond the Laptops website, which Neighborhood Allies intended to premier at a webinar hosted by the Pittsburgh Technology Council, an event attended by potential funders, community partners, and city leadership. Using original design and functionality ideas alongside requested features from Neighborhood Allies, TrailBlaze conceptualized and developed the Beyond the Laptops website in just two days. The website, which was successfully launched by the start of the Technology Council webinar, features a donation platform where individuals can make standard or customizable donations in support of the BTL campaign, with the option to contribute equipment and/or funding. The website also includes access to an “Equipment Scorecard” that provides up-to-date information regarding how much has been raised for the campaign and where laptops are being distributed (to families, school districts, Pittsburgh’s Department of Human Services, etc.). Importantly, the website acknowledges and visually highlights the contributions of volunteers and individual contributors who have made the laptop refurbishment and distribution process a success on a concrete, daily basis.

As a result of TrailBlaze’s strategic campaign, branding efforts, website creation, and other contributions, 30% of the target goal of $200,000 in match grants was reached within a single day. Currently, approximately $500,000 has been generated in support (funds and equipment) to ensure the success of the Neighborhood Allies’ “Beyond the Laptops” initiative. The organization continues to see an expansion of its support base from local, regional, and national sponsors originating from both the public and private sector. Following Aurora’s initial match grant, TrailBlaze’s work with Neighborhood Allies garnered interest and contributions from Verizon, Google, and other tech-oriented companies, forming a powerful public-private coalition seeking to empower individuals, families, and communities in need during the COVID-19 pandemic.

As a consequence of TrailBlaze’s swift success in improving the visibility and scope of the Neighborhood Allies initiative, TrailBlaze remains on retainer for Neighborhood Allies, assisting them as they move to Phase 2 & 3 of their Beyond the Laptops Initiative: Connectivity and Education & Engagement. In the campaign’s second and third phases, TrailBlaze will work to help Neighborhood Allies ensure digital equity, connectivity, education, and workforce development. TrailBlaze continues to support Neighborhood Allies’ initiative via strategic campaign support, social media management, web development, email campaigns and more. With nationally recognizable partners like Aurora, Google, and Verizon involved, the campaign has also gained national media attention, including requests for interviews and documented strategies for replicating the initiative in other U.S. cities. Most importantly, as a result of the collaboration between TrailBlaze Creative and Neighborhood Allies, a large number of Pittsburgh residents, families, school districts, and communities have gained access to laptops, resources, education, and much-needed support during the COVID-19 pandemic. 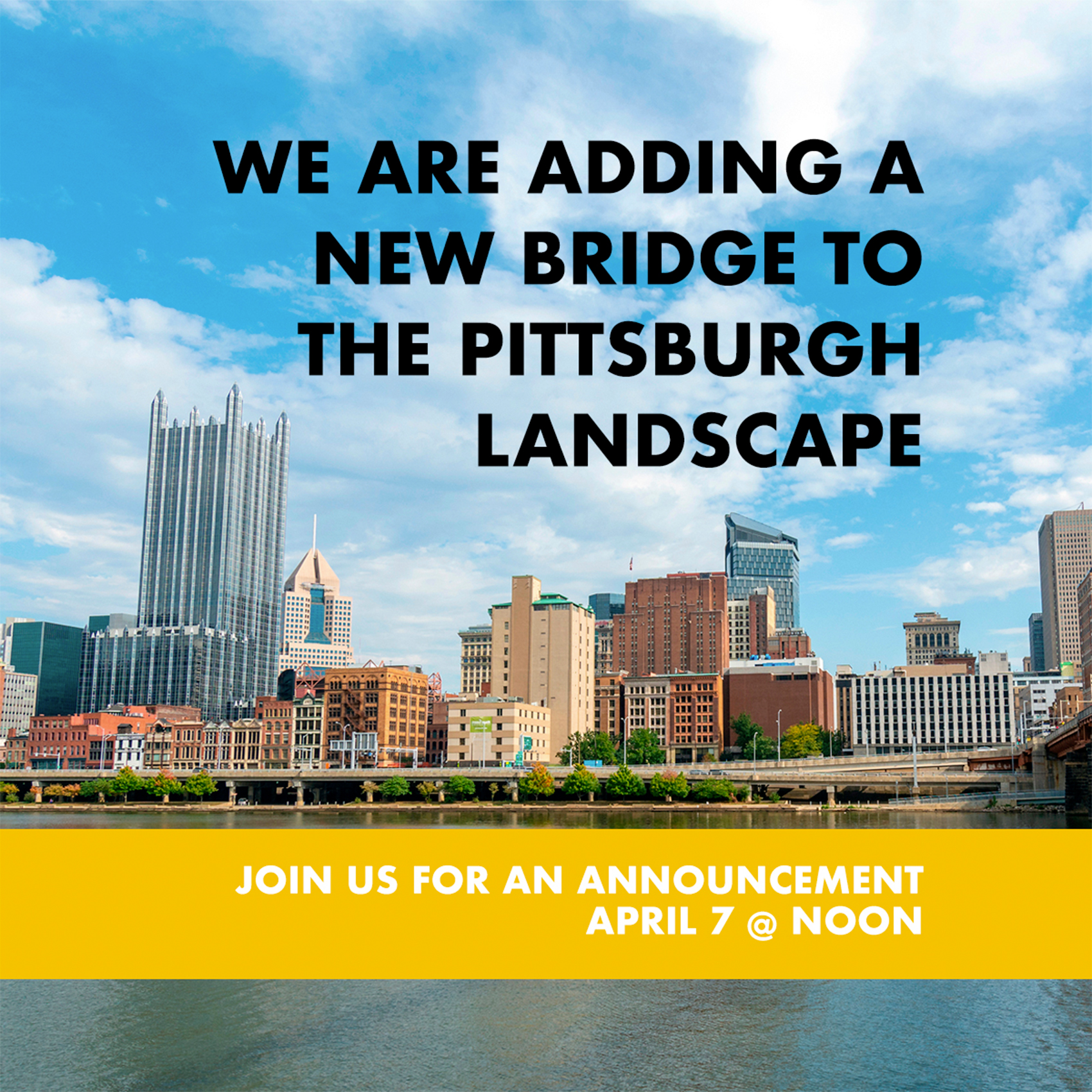 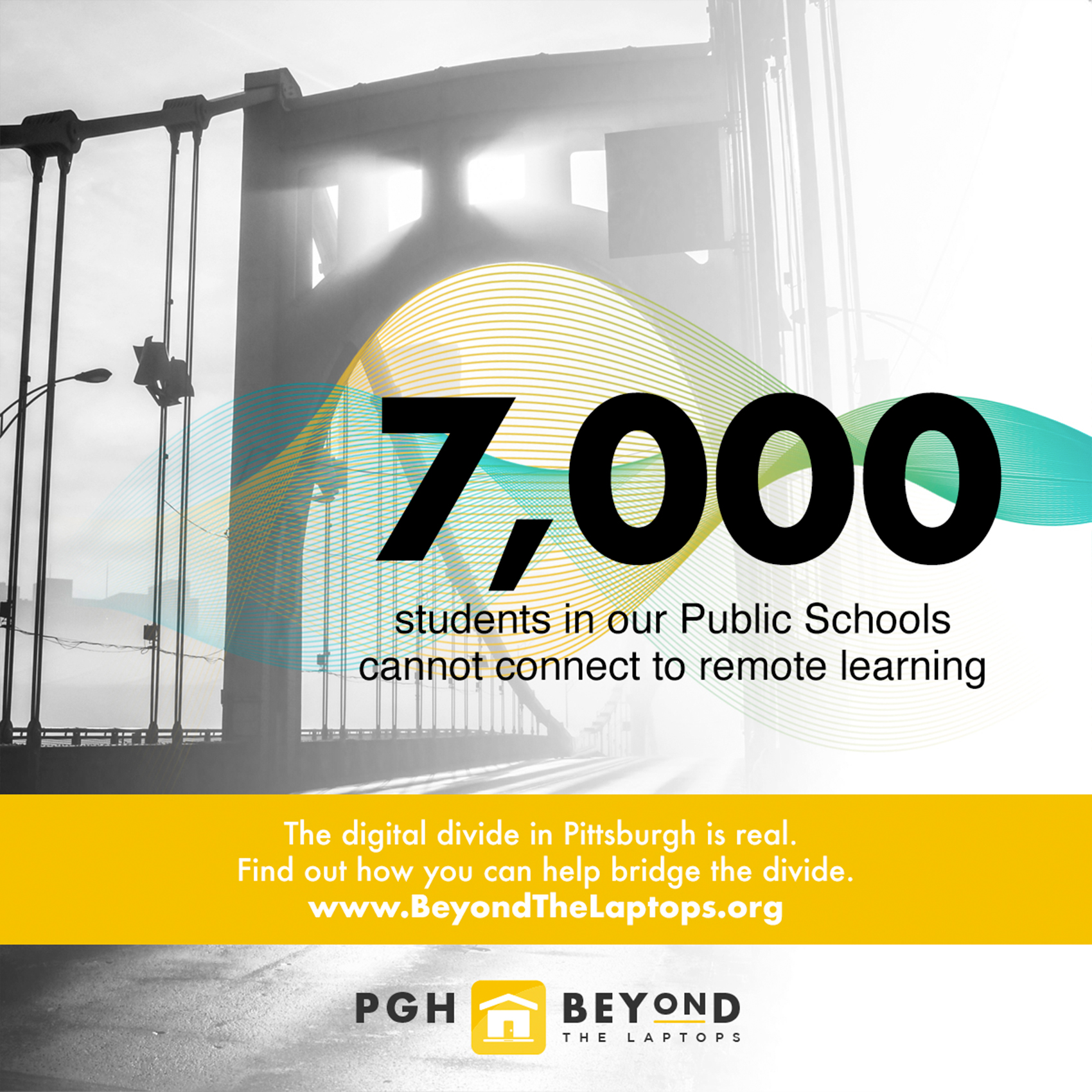 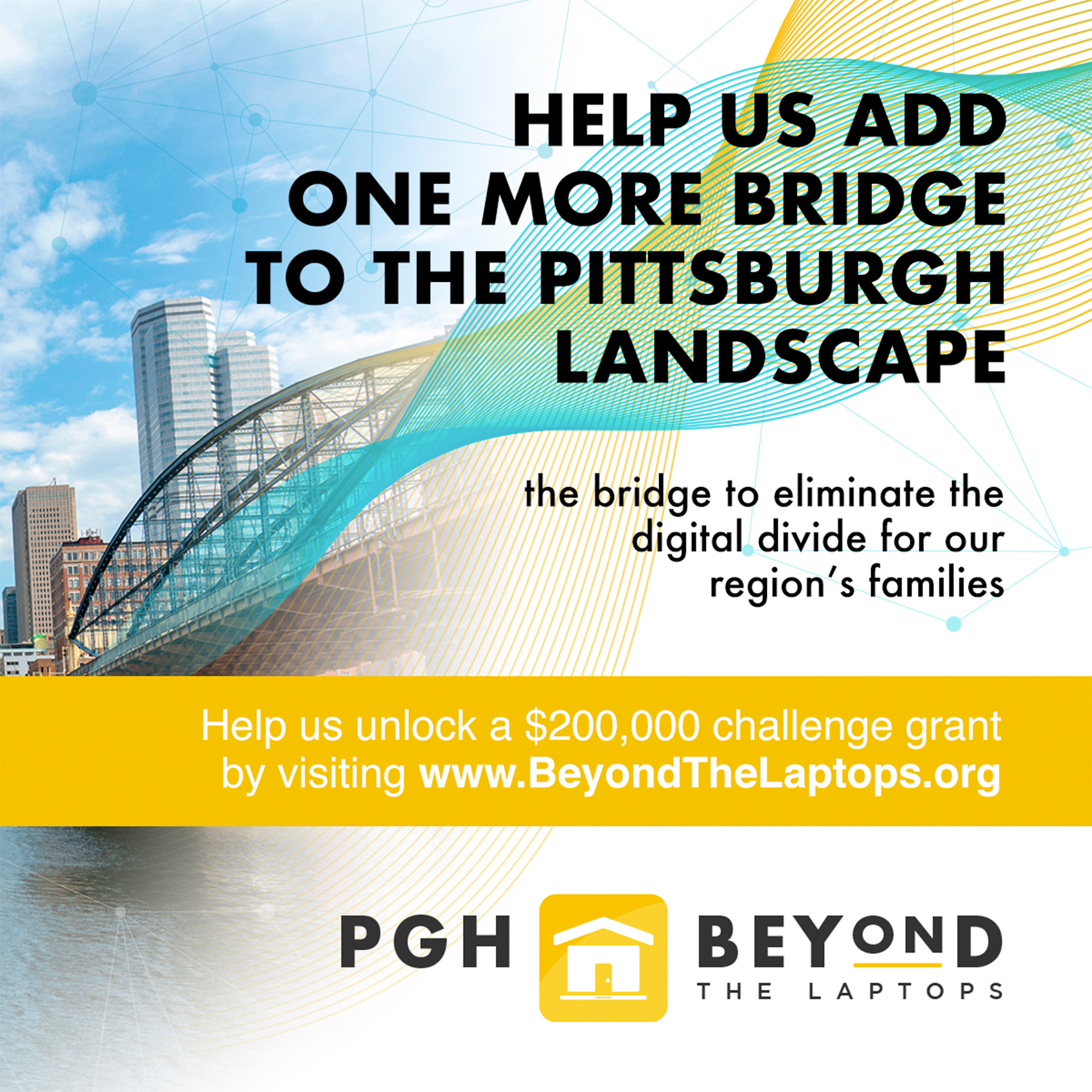 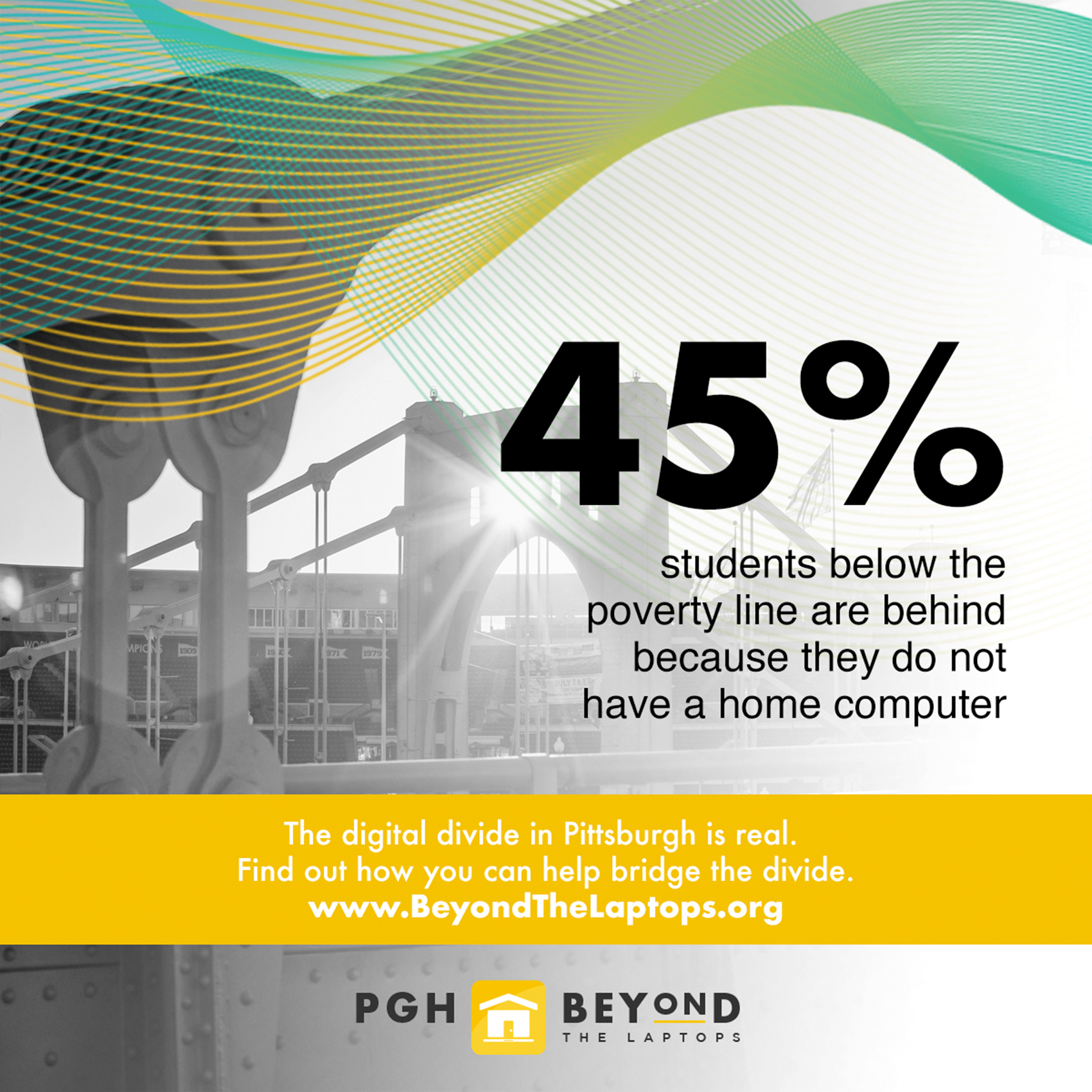 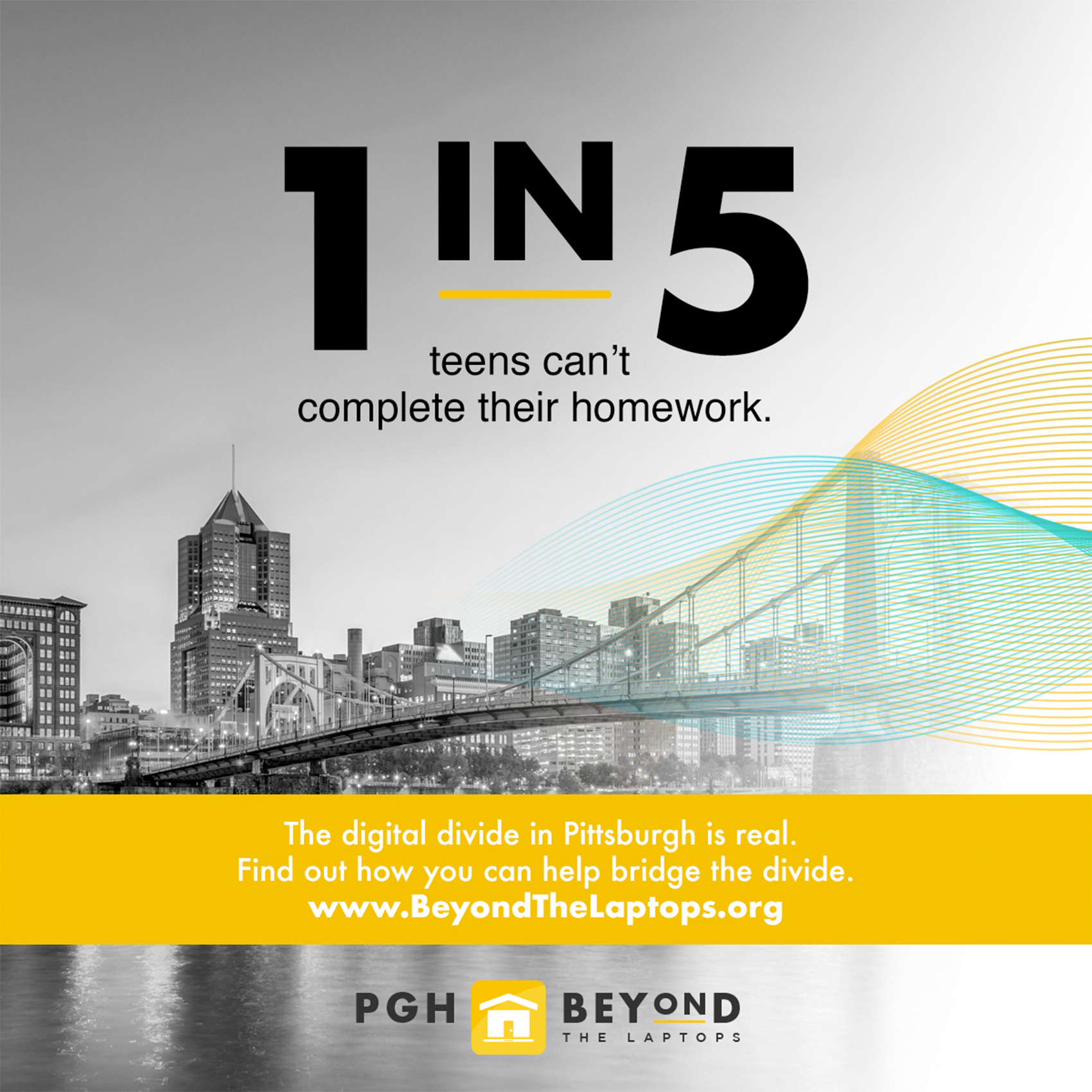 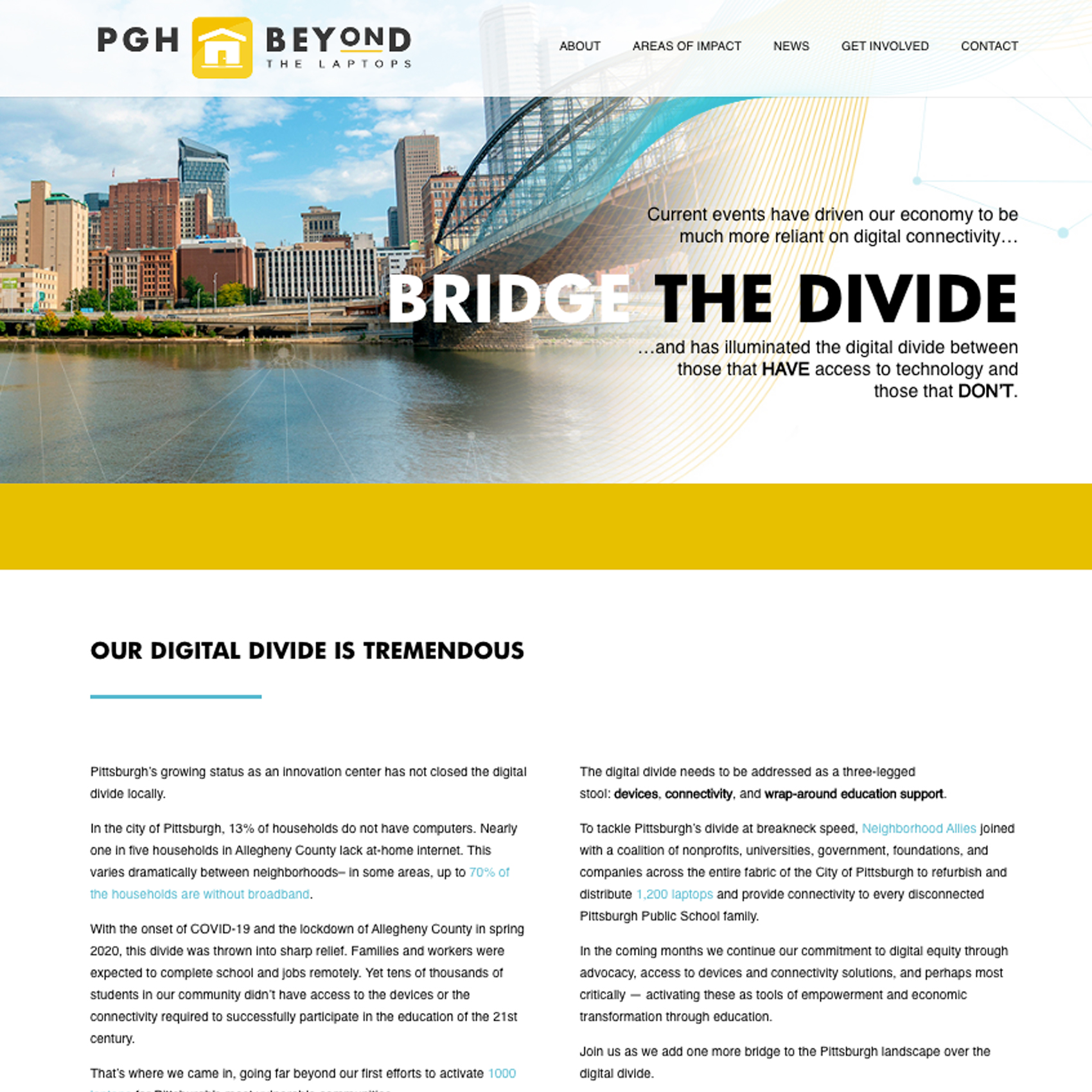